Falling slowly
Eyes that know me
And I can't go back

True that. I kept saying over and over how I thought it impossible, or at least improbable, for me to feel strongly for someone again after the drama and tears and whatever else with the most recent ex-boyfriend. I believed it completely; there was literally no room for doubt in my mind. To me, there was a difference between feeling enough for a guy to get into a relationship with him, and feeling everything there is to feel, that you're capable of, that is conceivable to you, for him.

What started out as the former situation has slowly, but surely, progressed to the latter. Tong has surprised me, and in the process I have surprised myself. In the process, in getting to know him and opening myself up to him, he's unwittingly mended something in me that I thought - genuinely thought - was broken for good. Not to say I walked around feeling broken before Tong; I didn't, and I never could. But my attitude towards a lot of things - love, especially - was primarily defensive, then secondarily jaded, and ultimately disappointed. What was hitherto the biggest love story of my life ended in tears and heartbreak, and the healing process took time, and took a lot out of me. Naturally I wasn't too keen on embarking on that suicide mission all over again.

Except it's not a suicide mission. It's not even anything bad. When I realised I was in love with Tong I freaked out so badly I was crying in front of my laptop, writing stupid emo entries, feeling like I was losing a huge part of myself to something uncertain and potentially inchoate. But the thing with him is that he's incredibly understanding, and patient, and he doesn't write off my irrational feelings as unimportant passing phases that I'd just get over. He takes me in his arms and makes me feel comfortable being so utterly vulnerable with him, and it's a kind of comfort that I never really felt with the ex - or with any guy I dated, for that matter.

It's a kind of comfort that's familiar and feels right. What it's borne out of, I'm not sure. Maybe the fact that we're JC schoolmates helps, but truth be told, I wasn't very close to him in JC and the only times I spoke to him in school, words didn't come out; laughter did. He was my clown, one that I didn't get to know too well, and everytime we talked on MSN in the intervening years (less than 10 times) we talked a lot of rubbish. I have found out more about him in these two months than I have the entire six years I've known him.

And yet, it feels like I've been with him since forever. It feels like he's been in my life since the beginning of time. His presence in my life is reassuring, as is the familiarity of his companionship.

He's really the best thing in my life right now. And I'm absolutely floored by how far we've come, and by how I'm in this completely, without reservations, without a doubt.

Of course, it helps tremendously that he's super adorable. Look at this adorable Korean schoolboy: 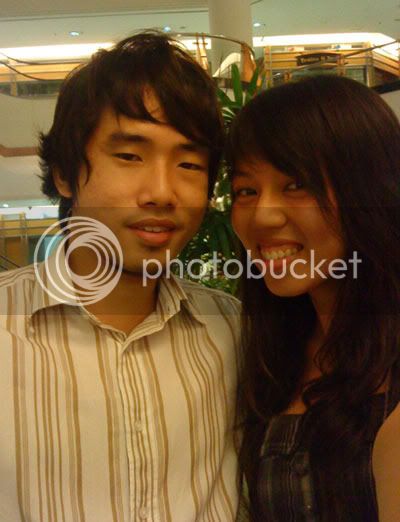