Some kind of wonderful.

I'll save the best for the last though, so I'll start with writing a few paragraphs about Commencement.

I think it can be summed up thus: I woke up at 5.50 this morning. I was groggy and cranky.

It didn't feel like much, and the actual ceremony was one huge snoozefest. I keep hearing about how this is a once-in-a-lifetime experience, but 1) I think I'd cherish my Masters more; and 2) it doesn't feel like anything special because we've all already started working, and now we're back to being students again, so it feels like a mere formality, emptied of any meaningful content. It's quite sad, really. Graduation isn't supposed to be this anti-climatic, but sadly, that was exactly what Commencement was today.

To be fair, I actually got choked up during the photo-taking thing in the morning when the professors arrived to take their positions in front. That was the moment when I truly felt the magnitude of what this morning meant: Law school is over. It's done. It's over and done for good. No more doing three intensive courses and having evening classes every day; no more sitting around the canteen (oh my god, I forgot what the canteen is called) drinking kopi c kosong peng and watching fellow students pass us by; no more rushing to school, in a bid to avoid lateness; and, above all else, no more interesting and meaningful classes/electives in which you feel like you're finally doing something worthwhile, something good.

When I think of law school, the first thing I think of - and I mean, the first thing I think of - is my final year. The classes I took, the stimulating exchange of viewpoints between people from all over the world, the amazing wealth of intellectual rigour that I derived from my electives, and how it was truly the first time in four years that I felt like going to law school was worth it. Figures, doesn't it, that I couldn't get the same level of satisfaction from the so-called hard law, compulsory modules we all had to take in the first two years; but this is just who I am. A disappointed idealist, but an idealist at the core, with her head in the clouds, dreaming up ways to save the world. My ambition has always been larger than my self, and perhaps my capabilities; I still remember writing a letter to George Bush in Sec 4, telling him not to wage war on the Middle East (I forgot if it was Afghanistan or Iraq), and I still remember feeling like I received a sacred document when Father Bahechet (I think I spelled this wrongly) gave us a copy of the UDHR in Sec 2. It's fitting, therefore, that the modules that stimulated and engaged me are the ones that concern international matters, matters of life and death, of suffering, of the myriad attempts to alleviate suffering. Simultaneously they are also cynical and sobering, because the real world is cruel and has little patience for idealism and principles; the real world is often driven by pragmatism and convenience, and the organisation which is most entrusted to safeguard international peace and security often finds itself bending to the wills and conveniences of its most powerful members than anything else.

My last year in law school taught me all of these things. It also made me realise, finally, what it is that I want to do. Without those electives, those classes where there were 90% foreigners, I think I'd still be bitter and resentful right now. Up to Year 2, I thought I'd graduate law school regretting ever stepping foot in this place; but after Year 4, and especially because of Year 4, I've come to conclude that the pain and torture have all been worth it.

That was what I got sentimental over this morning. This graduation, commencement, marks the end of this truly fascinating and engaging intellectual pursuit, at least for the next three years. I definitely want to go back to it when I have the means to do so, because if there's one thing other than writing that would get me out of bed in the morning, that is definitely it.

The social aspect...it doesn't feel final at all, because we're all still seeing each other daily at PLC, and we'll still be seeing each other often when work starts again. It's the nature of the profession - you never really leave the people with whom you graduate, until you leave the profession itself. I also appreciate the friendships I made in law school, but these friendships will go on, and I will see everyone again tomorrow at the Supreme Court, and so I didn't feel anything in that regard. I was really just sad - and I mean, sad - that I can't do Year 4 ever again, and that I was so lackadaisical and nonchalant about it all when it was still available to me.

I refused to wear black and white because it's my freaking birthday and therefore I will wear whatever I want. I was glad to be able to stand out from the crowd.

One of the most important people in my life. Ever. I couldn't have survived law school without my dearest Mag.

My favourite professor. And not just because he gave me an A+ for my Emergencies paper (which I really, REALLY have to get done before the PLC exams start).

My favourite Malay. Hahahahaha. She and I kind of share a brain.

My dear Peixuan, who came ALL THE WAY down to NUS for me. I was really, really touched.

My favourite half-Thai. Yay. One of my most cherished guy friends from school. Actually, ever.

Also, because I am me, I got extremely irritated by the whole shit after the ceremony, when everyone was milling around doing god-knows-what. It was so crowded that it pissed me off. I don't even know why. I'm just weird, I guess.

Lastly, I must say that Dean Tan is truly the best Dean in the world. This is his last year as Dean, and I'm glad he graduated, so to speak, with my batch. He's someone I truly respect because he's so unassuming and down-to-earth, and doesn't put on any airs whatsoever, when he's accomplished so much. He never fails to write emails to the whole school during the exam period, and always shares a personal anecdote with us to encourage us for the exams. He's truly, TRULY amazing. I wish I'd spoken to him, but I never once dared haha. I'm such a coward, I know. Oh well.

Despite the cheesiness, today was incredible because it was unassuming, simple, comfortable, real. I suppose I'm not very high maintenance, because all it took was a hand-made card, and the most incredibly sweet and heartfelt message a guy has ever written me (not to mention grammatically-correct and well-written), to get my eyes blurry and my throat painful. And everything that came before that, Plan B dim sum lunch (after Tong refused to wear a sarong at this atas Indian restaurant he originally wanted to bring me 'cause he didn't know there was a dress code), hunting for the repair place to fix my flat Tag Heuer battery, sitting at Coffee Club where I got my daily caffeine fix, walking around Raffles City, aimlessly, finally sitting down at Sakae Sushi when we got tired of walking, and him walking me to Carlton where I was slated to meet my family for dinner...pure perfection.

I feel so unbelievably comfortable with him, it's kind of fucking insane. And I genuinely adore everything about him that it's just not possible for me to mind anything about him. He's so good to me, and no one has ever been so good to me, and I miss him almost immediately after I leave him. And it's not in a strange, obsessive way; it's not the way I missed the last boyfriend when he was away, after we broke up, whatever. I don't know how else to describe it, except: it's healthy. And amazingly so.

He spent the whole afternoon with me, 12-ish to 6-ish. He makes me really happy. I read his card when I got home from dinner, and I read it a second time, and I came close to crying. I read it a third time, and I had to wipe liquid from my eyes.

He is so incredibly sweet. And I hope we'll get to celebrate my 24th, and his, too. 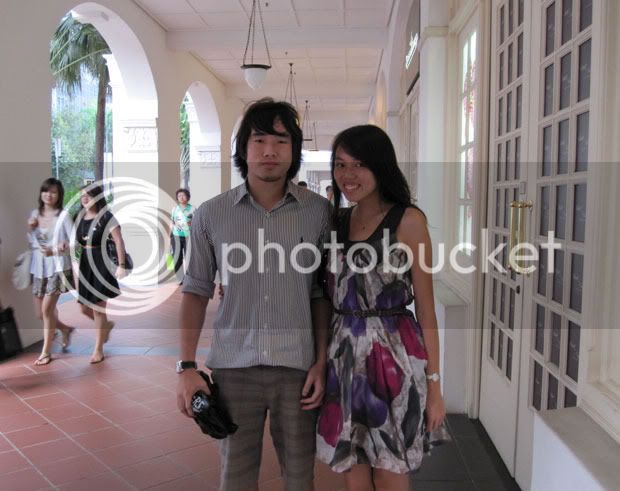 This is my boyfriend. And of course we HAD to take a picture at Raffles Hotel, he who wears a grand total of two brands - Ralph Lauren and Fred Perry. But it's okay. I kind of adore Raffles Hotel. But I adore Tong Wei Chuen even more.

Okay I'm going to stop gushing before I kill myself with diabetes.

My family and I had dinner at Wah Lok, Carlton, and I picked it because I didn't want to subject my dad to non-Chinese food. I didn't eat much as I was too tired to feel hungry but I ate two of the seaweed prawn scallop thing which is the only thing I like from Wah Lok, so it was all good.

This La Coste polo my dad is wearing? I bought it for him for his birthday this year. He loves it; says it's very comfortable. And yes, I only care about La Coste because of Andy Roddick haha. 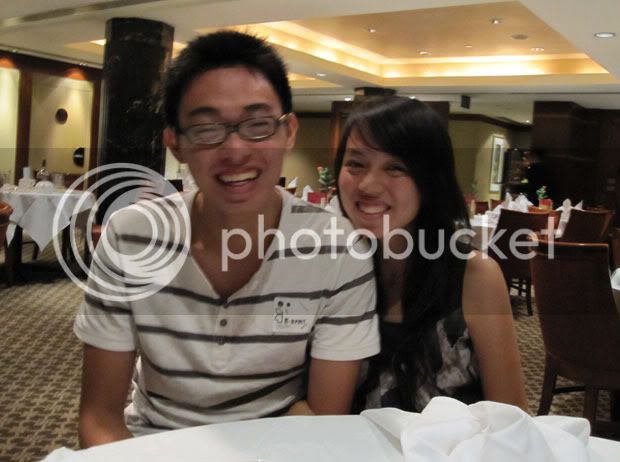 My brother looks so cute here.

My mom ordered Lana cake for me as per my order (yes, I ordered. Yay), and it was freshly baked and AMAZINGLY YUMMY.

Of course I have to end an entry about MY graduation and MY birthday with a picture of muyself, right? Duh.

AFTER LOOKING AT THESE PICTURES, I HAVE CONCLUDED ONCE AND FOR ALL THAT IT IS TIME I CUT MY STUPID FUCKING HAIR. IT PISSED ME OFF THE ENTIRE DAY. I TRIED CLIPPING UP MY FUCKING STUPID FRINGE BUT IT LOOKED DAMN GROSS. OH MY GOD. I HATE MY HAIR.

Tong is very sweet about it though. I couldn't STOP bitching about my hair and he was all, "I have no idea what you're complaining about because you look nice." I generally only care about his opinion because why the hell should I care what some random person thinks of me, but...shit, my hair needs to be fixed AS SOON AS FUCKING POSSIBLE.

Need to book appointment at Esprit for next week. Which is like the only time I'm free to cut my hair 'cause my this week is packed like mad. ARGH. Stupid ugly disastrous hair. I HATE IT.

Oh my god, I fell in love with Roger ON MY FREAKING BIRTHDAY.

I HAVE BEEN HIS WIFE FOR ONE YEAR. OH MY GOD.