And it's fitting and very appropriate that this "something" is a fifth all-time title at Basel, his hometown tournament, at which he famously worked as ball boy.

He wins the tournament - an ATP 500, being the 3rd biggest after Grand Slams and Masters, or the second-smallest if you wanna be negative about it - and then he tears up after receiving trophy. He didn't even tear up when he won Wimbledon in 2009 and broke Pete Sampras' grand slam record. The last time he cried after winning a tournament was the French Open in 2009.

I love his openness, his passion for his sport, and how his hometown tournament still means so much to him after everything that he has achieved. 68 titles later and he cries after winning the Swiss Indoors in Basel. This Roger Federer guy is just an amazing human being all-around.

As a tennis player, though, he is out of this world. Sometimes I think it's physically impossible for everyone else to hit the shots that he does. He hit a pin-point accurate forehand down the line, into the corner, off a Nishikori slice approach, and he was almost squatting; he was bent so low and so close to the ground. How does anyone hit a shot like that? They don't, actually; only Roger Federer does.

The first set was just absolutely sublime tennis from him. Backhand down-the-line, lethal inside-out forehand; Nishikori was up 40-0 in his opening service game, then went on to lose 6 points in a row. Roger turned on a switch, went on the attack, took time away from his opponent by hitting the ball so early, rushing the net; Nishikori probably didn't even know what had hit him until 3 game points were gone and he found himself broken in his opening service game. Roger is such a sight - such a sight - when he's playing - flowing, really - like this.

Nishikori attempted a comeback when Roger served for the match at 5-3 and forced a break point. Roger saved it with a first serve that elicited a return that sailed long. Before this, Nishikori forced Roger to play to 15-30, then 30-all; at 30-all, Roger let out the first yell of the night. After he saved break point, he let out another yell. The deuce point was probably the most nerve-wrecking point of the match. Nishikori threw everything he had at Roger - he seemed to hit the ball harder than he had the whole match, he defended well, then he hit a slice approach to Roger's forehand.

And then Roger hit that superhuman forehand winner.

On match point, Roger let a desperate Nishikori defensive lob bounce, and then finally smashed it to put it away and clinch a fifth title at a tournament that means so, so much to him. He had his arms in the air, he was grinning from ear to ear; at that moment, he didn't look 30 at all. He looked like a newcomer who had just won his first title. 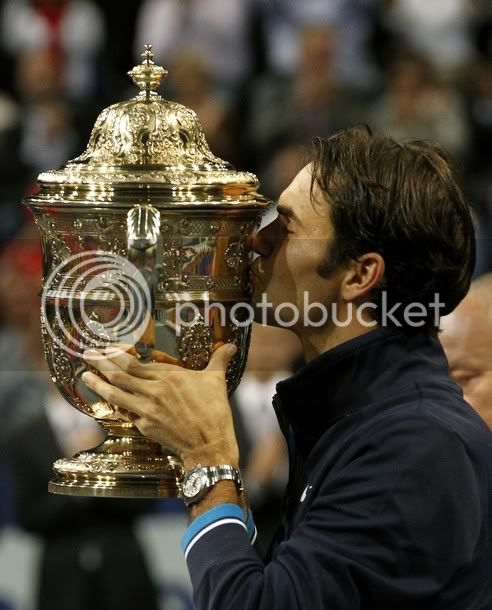 I hope he wins that horrible Paris Masters for the first time ever, and then defends his title in London, and then goes for a long restful vacation, and then turns it the hell on at the Australian Open in January next year and make it worth my S$4,000 and my flying all the way down under to watch him play.

Got more to say but I'm damn tired, so I'll leave it to tomorrow.

A few things to say:

My parents were away for a week last week; they went to that place in China where Avatar was filmed and I had to work so I didn't go along (I'm glad I didn't. After hearing about the lack of basic hygiene in the less-developed parts of China, I don't think I'd ever willingly go to China. And it's not as if I don't despise the country enough already). At first I thought I'd feel rather depressed at being at home all by myself, but after the first day, I was absolutely loving it.

It was great having no one to answer to, waking up on my own terms on weekends ('cause there was no one around to talk loudly in the dining room, outside my room, and inadvertently wake me up), doing whatever I wanted, whenever I wanted. I even liked cooking for myself - this is coming from someone who swore to never learn to cook because she wanted to rebel against type. I kind of still do, but the thing about cooking for myself is that I know what I like and I make my food according to what I know that I like. This is slightly different from cooking for someone, whereby I'm worried that something would go wrong and I would accidentally poison the person or something.

But anyway, I really enjoyed the freedom when my parents were away. I liked being by myself a lot, a lot more than I thought I would. It probably helped that we have a car at home and so I could take it whenever I wanted. I drove myself to work in the morning and the most challenging part was fighting to stay awake in the jam along Clementi Road. I could even sleep a bit longer on weekday mornings without a parent coming in to my room and barking at me to get out of bed.

I've always thought it would be depressing to live alone but now I think I could totally get with that. I was really happy that whole week, if truth be told. I'm a bit sad that it's over.

On the flip side, I'm happy that my parents are back so that I can ease up on the washing. Hahaha.

I'd planned this silly birthday surprise for Wei Chuen where I stopped being myself for a while and cooked for him. Seeing as my parents were away, I thought it was a good chance to execute the surprise; I would not have wanted to do it with the parents in the house, hovering around and making unsolicited comments. Ergo, this was done last Friday.

This is where I expand a bit on what I said earlier about cooking for someone else. I made aglio olio pasta, which is probably the easiest thing ever to cook, and pan-fried salmon. The pasta part was a breeze. The salmon part made me want to impale myself.

I should've baked it instead, because after both slabs of salmon were pan-fried, my whole kitchen stank, and I smelled exactly like my kitchen. I was sweating. The oil was splashing everywhere. The best part was, the fucking fish took forever to cook inside. I focused so hard on making sure that no part was left raw that the fish was overcooked in the end.

SIGH. I also decided to make potato salad the day before, after talking to my new friend at work about it, who convinced me that potato salad was really easy to do. She was right, but it was my first time boiling potatoes and I made a mess of it. I was convinced that the potatoes were overcooked because they were practically coming apart in my hands when I put them under running water to get the skin off. Thankfully, I bought a good tub of sour cream and it actually came together. My new friend told me to put hard-boiled eggs as well, but I decided to skip that as I was of the opinion that trying to convert something raw into something edible for the first time was enough of a headache; I didn't need to be attempting to hard-boil an egg too.

Wei Chuen was only half-surprised though. He kind of guessed when I made him change his initial plans to play squash and told him that no, he couldn't go for squash first and come over to my house because he had to reach at 6-something.

Okay, that was pretty obvious, but what else could I say? And anyway how would I have known that he actually made plans, considering he's not a planning person?

He liked the potato salad. And he wasn't poisoned. I consider that a success.

He stayed over and we spent the whole night watching television. Seriously. He watched Survivor at midnight and I fell asleep halfway, both because I was tipsy from wine (I'm not a drinker so a quarter of a bottle of wine was enough to kill me) and because I didn't know what was happening on Survivor. We also watched a travel episode on Paris on BBC Knowledge. Somehow, watching the show with him and commenting on it just felt so right.

The next day, we went to Queensway Shopping Centre after lunch at PS Cafe where I bought a pair of running shoes so that I can utilise the gym in my building. I looked for the cheapest pair and found it at $71. Yesssss.

He bought a new squash racquet even though he wasn't looking to buy one, simply because he saw a white Dunlop one which was too pretty to resist. He's incredible.

I'M TOO LAZY TO CONTINUE THIS.
Collapse