I Won a Tennis Match

Yeah, I know - it's amazing that the title is an actual fact and that the world hasn't ended. I don't even know what happened; things were business as usual when I was quickly down 2-5 and resigned myself to losing it 2-6. Then I broke back. And I broke back again. And I held serve for 6-5. And then I broke for the set.

In all seriousness: my opponent gave me a bunch of second serves to feed off on and I began to time my shots properly when I murdered my returns. My consistency also went up while his went down. I made it a point not to get too excited when I get a ball to my backhand, and yeah, I went for way too much on too many backhands and almost hit the ball into the opposite fence once; but the effort to focus on hitting it right, as opposed to hitting it fast and hard, resulted in my getting the ball more in than out - and sometimes even unreturnable.

I almost blew a 0-40 lead at 6-5. My opponent started serving these bombs and half the time I couldn't tell if they were in, so I gave him the benefit of the doubt and conceded two of my three set points on this basis. I think this is why I hardly ever win matches: apart from how I'm just a complete mug when I play competitively, I really don't have the required killer instinct because I'm too fucking nice. I actually feel bad/embarrassed when I'm in the process of beating someone. How does that make any sense? It's a good thing I'm not a professional tennis player; I probably wouldn't win a single match - on the FUTURES circuit. (The hierarchy of circuits, on the men's tour at least, is futures, then challengers, then the ATP tour. Not familiar enough with women's tennis to know its equivalent and whether it's different.)

Anywa, the second was interesting. I actually didn't get broken in the second set which is an achievement in itself because I usually get broken at least twice...per set. When I broke for 3-1 and then held for 4-1, I was hoping to break for 5-1 so that I would have a nice cushion and not want to die if I fuck up on my own serve. Alas, that didn't happen; but I held for 5-2, and when my opponent was serving to stay in the match, I had a whopping four match points. We went through this pretty long deuce game, which produced my four match points; but I couldn't string two decent points together and actually got tight when playing my match points. I had a pretty short ball to my backhand and I ran up for it, and while running up, I literally thought, "Oh my god I want to finish this point in style with a WINNER!" What did I end up doing? Rushing the fucking shot and missing 99% of the ball. Very well done, Self.

At one point during that long game (either deuce or one of my match points), I hit this AMAZING forehand deep into my opponent's forehand corner, and I knew that I thought it was amazing because I thought, "Oh my GOD what an amazing shot!" In the process of thinking those few words, I lost two precious seconds admiring my own shot which resulted in me losing focus, then failing to anticipate that my opponent would get it back in play, then failing to prepare myself for the follow-up shot, and then, when the said shot came spiralling at me and landed in, failing to be in position for it. Eventually, the ball bounced off the edge of my stringbed and landed limply by the net.

This admiring my own shot shit is really a huge distraction. A couple of times I got back my opponent's first serve bombs, and got them back pretty well. I then proceeded to waste my wonderful returns by thinking about how wonderful my returns were and then losing focus and finding myself unprepared for the next shot and doing something utterly stupid on them, and losing the point. I wanted to murder myself on those occasions.

I also wanted to murder myself when I clumsily went to the net, just to predictably get passed: approach shot wasn't even a real approach shot but a regular grounstroke and I made the belated decision to approach for reasons that I didn't even know; was drawn to the net by a short ball, ON MY BREAK POINT, then instead of retreating, I attempted netplay - and got passed in the end. When I actually made contact with the ball at the net, I hit my backhand volley out. After my third failed attempt at the net (I was 0 for 3), I actually muttered out loud, "Stop going to the net oh my god."

I got really, really tight when serving out the match at 5-3. I don't think I made a single first serve and produced what was my second or third double fault of the entire match. I fucked up at 40-30 (could've been when I produced the DF) and when the score was deuce, I was already thinking about how annoyed I was going to be if I got broken and then lost the whole thing. If I had lost after having 5 match points, there would have been a very reasonable chance that I would actually quit tennis. Like, for good. Thankfully, my opponent hit the ball out on my 5th match point and I live to play tennis another day.

Now that I have experienced what it feels like to be in a winning position, being up a set and a break and all, I must say that it's rather challenging to keep my focus and not get ahead of myself. I found myself imagining the victory and pictured myself texting Arnaud, "OH MY GOD I WON!!!!!!!!!!!!!" and I had to force myself to stop that crap and focus on the present. Roger always talks about focusing on one point at a time. Now I understand why.

I was so stoked to have won a match that I absolutely had to commemorate it with a picture. 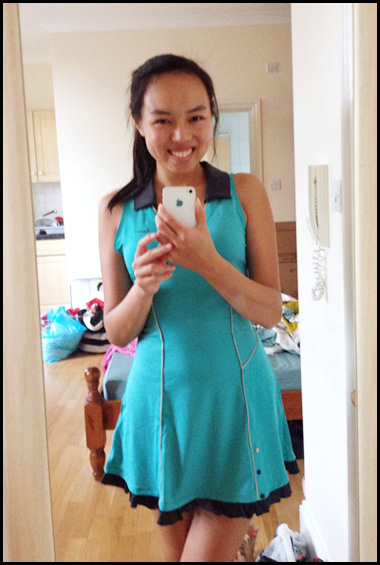 I really liked the way this dress looked on Maria Sharapova. When I first tried it on (I got it off eBay), I thought it was a bit long so it had been hanging unworn in my closet for months. I decided to wear it today for the hell of it and I kind of regretted it when playing. It's too long. This is not as preposterous as it sounds and I'm not saying this simply because I enjoy showing off my legs. I'm used to wearing super short skirts which are really comfortable when there's a bit of heat. It was humid (by London standards) and I was a bit distracted by how much fabric there was around my legs; it even felt kind of hot. The only positive thing about the fact that the dress is a bit too loose is that it hid my tummy rather well. You can see it's not that big in the picture.

Anyway, so that's that.

I Was Very, Very Sad

Being hormonal more or less magnifies and intensifies the emotions that one feels on a regular basis. That is my go-to explanation for my mopeyness the whole day, especially when I finally talked to Arnaud on Skype. Sometimes I almost don't want to see him on Skype; it's a further reminder of the vast distance between us, and there's a certain cruelty in how he appears so close to me and yet he's so, so far away. He's right in front of me on my computer screen and my immediate proximity with my computer screen on which his image appears induces in me an almost instinctive urge to reach out to touch him; but it will not be him that I touch, but a mere functional, lifeless screen.

It doesn't help that I can't hear him properly half the time because of my lousy Internet connection.

It doesn't help that there is a sizeable time difference between us because I can't get his immediate response to the things that I send to him which are important to me - like the entry about our trip that I spent way too much time on.

Above all else, I really, really, REALLY hate being enslaved by this period crap. Everything feels ten times worse when I'm about to have my period, and it drags on for days and doesn't relent until I have to trade one discomfort for another. The worst part is that I know what is happening to me but I can't rise above it; I can't block it out. It's been one thing that I have been unable to control and it drives me crazy. This is one of the things that I hate the most about being female. In fact, I can't even think of another thing that I merely dislike.