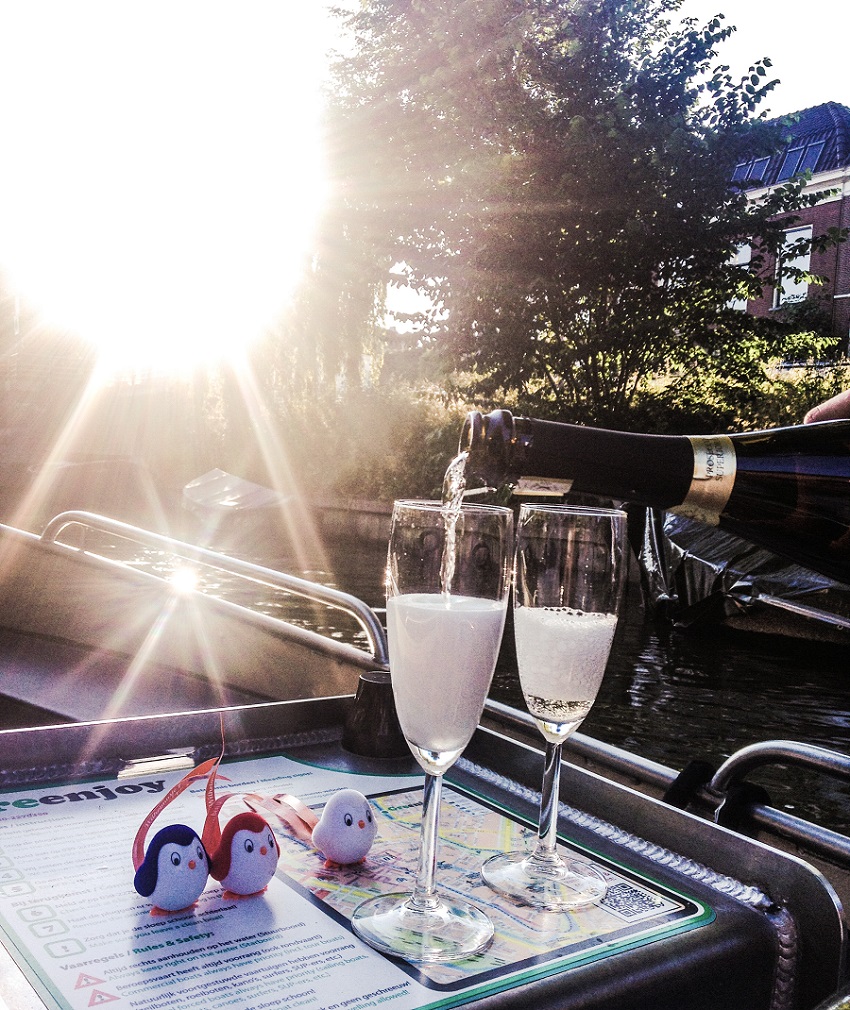 I hate to be braggart about this (yeah right) but I am either really clever, or I am really clever. I totally guessed the surprise in Utrecht that Wouter planned. First he said that I would 'see Utrecht from a different perspective'; then, after I ventured a guess (which he denied) and made a throw-away comment about how the activity that I guessed was cheesy, he said that he regretted it and hoped that I wouldn't find it too cheesy. The latter was probably what convinced me that I was right. To his credit, he made concerted efforts to deflect the dead-on accuracy of my guess, such that I more or less believed him; but still, I guessed it.

He took me boating on the canals of Utrecht. It was ridiculously romantic. It was one of the most perfect evenings of my life. He had everything planned: the boat, the food, the sparkling wine. I am not used to this, but I must admit that I like it very much.

He was right when he said that I would like Utrecht, and he knew that I would like it because he listened, and remembered, when I told him that I liked going to historical cities and places. It's a charming town with old buildings and a Gothic-style church tower to remind you (as if one needed any reminders) that you are in Europe. The canal snaked around bustling restaurants lining its banks and quieter areas of lush greenery, cosy houses with small backyards, and seemingly endless patches of grass on which sun-starved locals and students laid, soaking up the long-awaited summer rays. There was a slight breeze at 8pm but the sun shone on still; and as we slowly navigated the still waters beneath the fading light of dusk, I felt a stupidly girlish happiness that I hope I conveyed to him, if not in words, then in the way I put my arm around his shoulders, his waist; my hand on his face; my hand in his; my lips on his.

He literally did everything. Literally all I did was sit there, ooh and ahh at the scenery, take a lot of pictures like a typical Asian tourist, eat the food that he made and bought me, and drink the sparkling wine that he poured for me. I tried steering the electric boat for a few minutes but gave up after I found it harder than driving a car. He did everything: cut open some baguettes and spread garlic butter on them; peeled off some bread which he gave to me to throw into the canal to feed the ducks (he was amused by how exciting I found what to him was a mundane childhood activity - duck-feeding); poured the sparkling wine; drove the boat; paid for the boat; figured out how to drive the boat; figured out the direction to the pier from Centraal station; took photos of me; and continued to be the perfect boyfriend that he's been so far, even before we felt comfortable enough to use the conventional labels. He is literally my Mr. Perfect. I have never felt so compelled to use this over-the-top term on a guy but he fits the bill to a T. When I asked him if he thought I was spoiled because I was just letting him do everything, he said, 'I don't think you're spoiled, but I like spoiling you.'

At one point, we were floating along behind a boat filled with people celebrating a wedding. We were in the city centre and were languidly cruising along, laughing at the cheers that we heard ahead of us, which we saw that the wedding people were encouraging. When it was our turn to go past the same line of diners that had just seen off the wedding people, they started cheering too. Cheering and clapping, so many eyes on us, and I reverted to my Asian reservedness and hid my face behind my hands, then behind his shoulder. He was all chill though, laughing in that easy-going way of his, and probably thinking what fun it all was.

It was fun. It was funny. I liked it despite my general dislike for being in the centre of attention. He told me that I should've kissed him more, but that would definitely have added to my sense of shy embarrassment. Still - it was fun. Who knew that the Dutch could be fun?! (This is a joke, for the avoidance of doubt.)

After the boat, we had some wine at a bar near the bell tower. We had to leave at about 11.30pm. Parting is always such sweet sorrow.

On a more superficial note: regarding the stupid two-sentence entry I posted at Wouter's, all I can say is that the hotness of his body is unstoppable. If he'd approached me in a club, I would've totally made out with him.

I would post more pictures but I don't have Photoshop installed in my new laptop yet, and I can't use these stupid apps to get the effect that I want. I don't like how I can't control how much of a filter I want and things like colour balance etc etc etc. It doesn't work for me. I had to use Paint to resize the picture, and it's still too big, but I'm too lazy to re-do it so I'll leave it as it is.

I'm having massive problems these days waking up for work. Hadyu (Indonesian friend) said it points to a loss of motivation. I think he's right.
Collapse