Some hours have passed since I finished the half-marathon. I'm now sitting on the couch at home, typing this, feeling a dull ache in my head and some painful stiffness in my legs. Even though I didn't sleep very much and got up at 3am to take a taxi at 3.30am, I don't feel very sleepy...not yet, anyway.

The race today was my second-worst run since I started training, the worst being the long run (the 17.5km) that I did a couple of weeks back. At least I was right about how it couldn't get any worse than that, but I'm dismayed to announce that it didn't get that much better either. That is: I finished in 2 hours and 20 minutes. While it's ahead of my specifically-for-Singapore 2 hours and 30 minutes target, it's still slightly disappointing that I really didn't meet the initial 2.15 target.

But the positives. The first positive is that I didn't exceed 2.5 hours. The second positive is that I pretty much ran the entire thing. 'Pretty much' because I had to stop for a few seconds for water out of necessity due to the amount of people crowding around the water station; and towards the end, perhaps at around 18km, when I thought I absolutely couldn't go on anymore, I stopped for a few seconds. If I hadn't, my legs might have broken into two.

The third positive, I suppose, is that I hung in there and simply kept going, kept running, no matter how much my body was screaming at me to stop and let it off the hook. Mentally, too, I was split between 'fuck this shit I'm just gonna walk the rest of it' and 'shut up you weakling, you set a target, so just bloody do it'. I wanted to stop running, and the thought was really tempting, but because I know myself, I knew that I would feel really disappointed afterwards for stopping when not stopping was one of my targets--and I would have felt disappointed even if I had finished within 2.5 hours. So I just kept going because I didn't want to feel disappointed, or as if I had failed, however slightly and insignificantly. It is true, isn't it, at least it is for me, that there aren't that many greater motivators in life than the fear of failing.

Today was really a test of my mental strength. This is one of the things that thrill me about sports: in a very condensed period of time, I get to test my own limits and see what I'm capable of, or not, as the case may be. So now I know that I'm not capable of running under 6km/min in this kind of humid climate. Okay, fine; shouldn't have expected miracles when I'd spent a little over two weeks training in Singapore, and definitely shouldn't have underestimated the humidity's energy-sapping prowess. So that's that; next.

What's next? Well, I hung in there, didn't I? Just kept counting down the kilometres, kept telling myself to push on, to keep going, no matter how tired I was. It really wasn't easy, the final 3 kilometres. I had a grand vision of me running at my UK pace for the last 2 kilometres...ha! What a striking story! Instead, I dropped to fucking SEVEN-ish minutes/km and I really had to force myself to not stop, keep going, put one foot in front of the other. Of course, it didn't help that I literally couldn't see the finish line while running down Esplanade Drive, because we had to turn right into the Marina Bay float area where the finish line was, which means it was not visible at the final lap. So I couldn't see it, and I had no idea how much more I had to run, and I felt so bad because my legs were in so much pain. I felt as if I was running blindly towards a finish that I couldn't see--which really wasn't very motivating.

What was motivating, however, was the thought that, if I sped up just a little bit, the nightmare would end sooner rather than later. This was the dominant thought in my head over the last 3 or 4km; I wanted to go faster not because I cared about my timing (there comes a point when one gets so beaten up by the sheer physicality of the event that these things don't matter anymore), but because I wanted the torture to end. This worked around 18-19km, but the last two kilometres, not being able to see the finish, I was desperate and hurting and all I could think was, 'HOW MUCH MORE DAMMIT?!'

2km is a piece of cake only when you haven't been running for over 2 hours. When you have, though... Those last 2km felt like the most arduous, most painful 2km that I'd ever ran in my life (including all the times I was forced to run in JC, a.k.a when I was absolutely unfit and did zero sports). I managed to drag myself towards the finish and then sprinted past it out of desperation, because I wanted to stop running, and I didn't allow myself to stop until the race was over.

So just kept going; hung in there; and got the job done. Saw my parents towards the end, which was really nice. They, of course, got up with me at 3.30am, and would've driven me to the F1 Pit Building if I hadn't convinced them that it was better for all involved if I took a taxi (though it turned out it was NOT better for me; more later). I continue to be amazed by how supportive they are.

There is a lot of focus so far on the last 3km of the race. It stands out in my mind because of how challenging it was, more so than the rest of it. This is not to say, of course, that the rest of it was a piece of cake; save for maybe the first 2km, it was not easy at all. The only time when I felt mildly relaxed and in the zone was when I was running down slope on West Coast Highway after some water and an energy gel. For the rest of it, it was mostly laborious, partly treacherous because I had to dodge people in my way when I overtook them and had someone almost run into me as he overtook me (and proceeded to rub his sweaty arm against mine...ew), and 100% smelly. Laborious because humid, because hot at some parts (under bridges, for instance), and because smelly. So smelly. So many sweaty people, and 'sweaty' is an understatement for the copious amount of perspiration that everyone produced, and the wind was too mild to carry away the stench of sweat. I smelled so many different types of sweat this morning to last me a lifetime. I really hope that I don't smell that bad when I sweat.

But of course: humid. Too humid. I hate running in these conditions; I would take the English cold any day...though perhaps not in winter. Then again, I think even that would be better than Singapore's humidity. In any case, my top was completely soaked through barely 5km in. I tried to lift it up and tuck it into my sports bra, but to no avail. What also kept me going was the thought of being rewarded with water every 2km. And running up West Coast Highway...when I saw the slope, I was mentally laughing and thanking my area for being as hill-y as it is.

I was a bit surprised by the number of people who didn't take it very seriously. Some would stop and take pictures with things, such as some random banner, and the sunrise. I don't know what's so fun about going to a half-marathon and 'have fun' because it's not like it's free, right? I don't see the point in doing that at all. If I want to have fun, I will go to the beach; if I sign up for an event such as the half-marathon, I want to do it well, not arse around during the race and be in people's way. But to each of her own, I guess.

So: a couple of pictures. 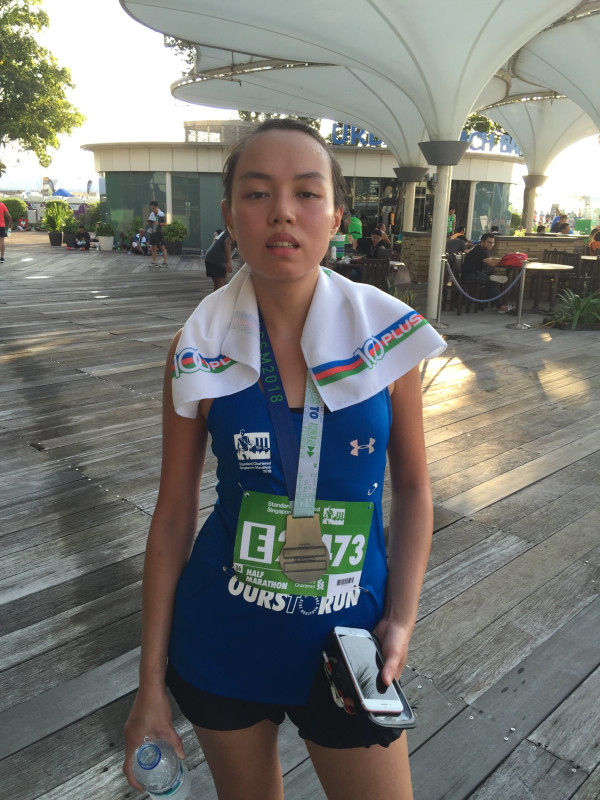 This was literally my face post-run. 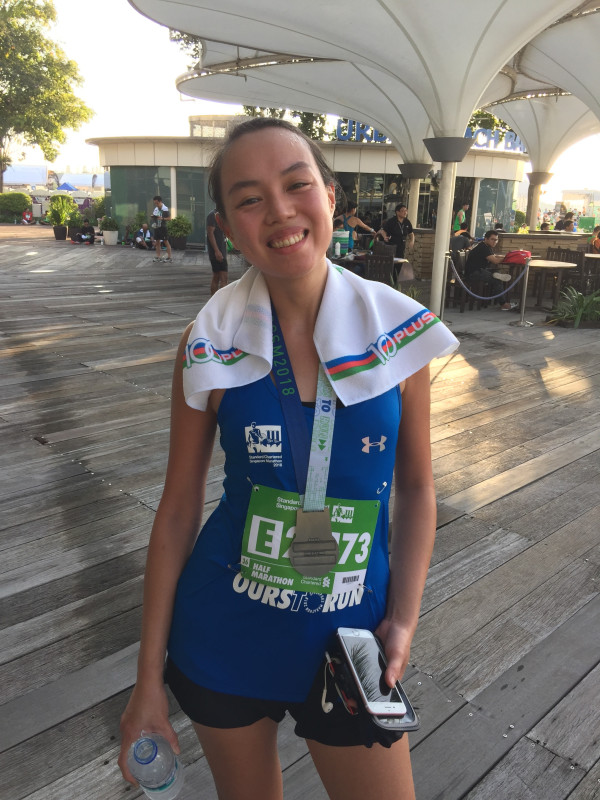 Had to have a smiling one, no?

To wrap up: how do I feel? I feel like I need to clock a better timing, and so I feel like I should run for a charity at the Cambridge Half-Marathon (because the normal slots are sold out). Or rather: I feel like I should test whether I can run faster in the conditions that I'm used to. So I'm going to do it. Why not? It's in March, so plenty of time to train (though I will only start when I'm back in the UK). I feel like saying 'I could have done better' would be specious and arrogant because no, I could not have done any better. I gave it my best shot, perhaps even my all, ran it the way I knew how, the way that I'm used to, and perhaps could've had a better method but I'm not into running the way that I'm into tennis, so it is what it is. I could not have done any better today. Perhaps in the future, but not today.

So yes, I suppose I feel rather proud of myself for getting this done rather respectably. It could've been a lot worse--I could have started walking, for instance--but it couldn't have been any better. I am pleased, then.

Okay. Taxi story: I got into the cab at 3.32am, thinking I would arrive before 4am and have plenty of time to get myself water, to the toilet, and then to the front of Pen E.

But I ended up spending one hour in the taxi. The fare came up to $59. The driver had enough of a conscience to give me a discount, so I paid $40 in the end.

The reason the ride took so long? The driver, an elderly man who had clearly been driving for many years and hence the arrogance, did not check the proper route to take, which he ought to have done because 1) the marathon caused several road closures; and 2) he knew that I was going to the F1 Pit Building which obviously took him into the road closures parts of the city.

So we ended up circling around the CBD and in the end, he dropped me off at Raffles City and I half-walked, half-ran to the F1 Pit place. I reached my Pen a minute after it closed. Great.

I was so stressed out in the car. Thankfully it didn't really matter that I was late; that is, I wasn't disqualified or anything. But it did affect my start time. I was hoping to start at 5am to run as little in the daylight as possible, but by the time it was my group's turn to run, it was already 5.15am. It was really not ideal but in such situations, there was simply nothing else to do but to just suck it up.
Collapse