The next time I come to Rome, I will come armed with a list of good restaurants/cafes/bistros to go to. Never again will I randomly walk into a restaurant, especially when I find myself stranded in a mega touristy area for at dinner time. After tonight's dinner, I have finally learned the lesson that my tiramisu from two nights ago tried to teach me: never EVER eat in a restaurant without first researching it.

I had this for dinner: 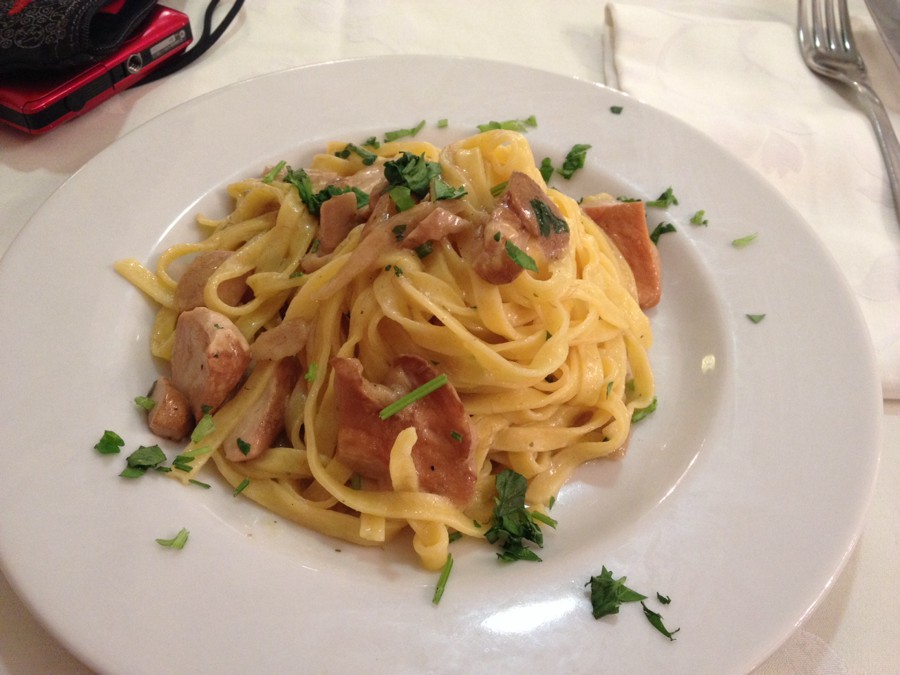 It was literally the second-worst pasta I've ever had in my entire life, losing only to the disaster that Mag and I had in Paris five years ago - and yes, I am including those misguided times when I ate at Pasta Mania to what I call MY ENTIRE LIFE. The only thing that saved this dish from being the worst pasta ever is the noodles, which tasted vaguely home-made (it was advertised as such in any event) and therefore won over the shit I had in Paris. Otherwise, this dish was just as bad as the Paris crap: it was tasteless. It was bland. The mushrooms seemed to be under-cooked. And it cost 13 euros.

When I heard from others that food in Rome was terrible, and when my tennis opponent told me that he had an absolutely horrible pasta dish in Rome, I couldn't understand two things: 1) how can Italian food in the Italian capital be bad?; and 2) how bad can pasta possibly be?

That dish right there answered both questions for me. It was a fucking a abomination. I was stuck in Spagna and I didn't research on where to eat save for this place that I had already gone to for lunch, so I was walking around trying to find a place that looked decent but in the end, I still randomly walked into a restaurant, mostly because the waiter was friendly and I felt bad to just walk away. Personally I couldn't think of a worse reason to patronise a restaurant and sometimes I can't believe how retarded I am. The only saving grace was that I ended I paying just 10 euros because the waiter didn't have change when I gave him 20. In giving me a discount, he said, "You get a discount because I like you. You are pretty!" I laughed as I thought, "These Italian men...seriously!"

Usually I feel bad when I pay less than what I should pay, but not today. I felt bad not at all. It wasn't even worthy of 10 euros. I wouldn't eat it even if someone paid me to eat it - that was how bad it was.

In sharp contrast to my dinner, my lunch was FABULOUS. 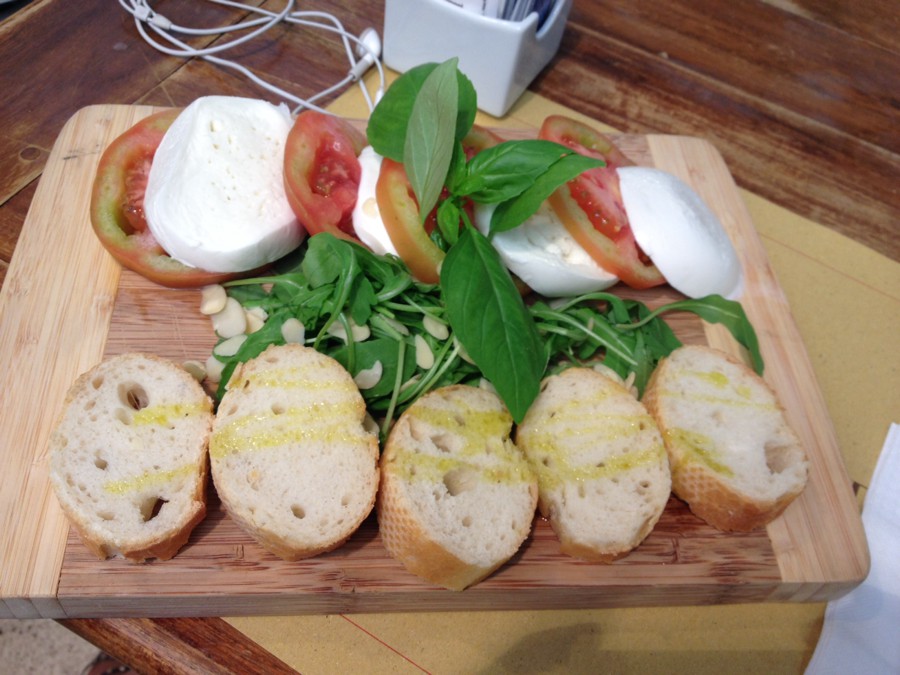 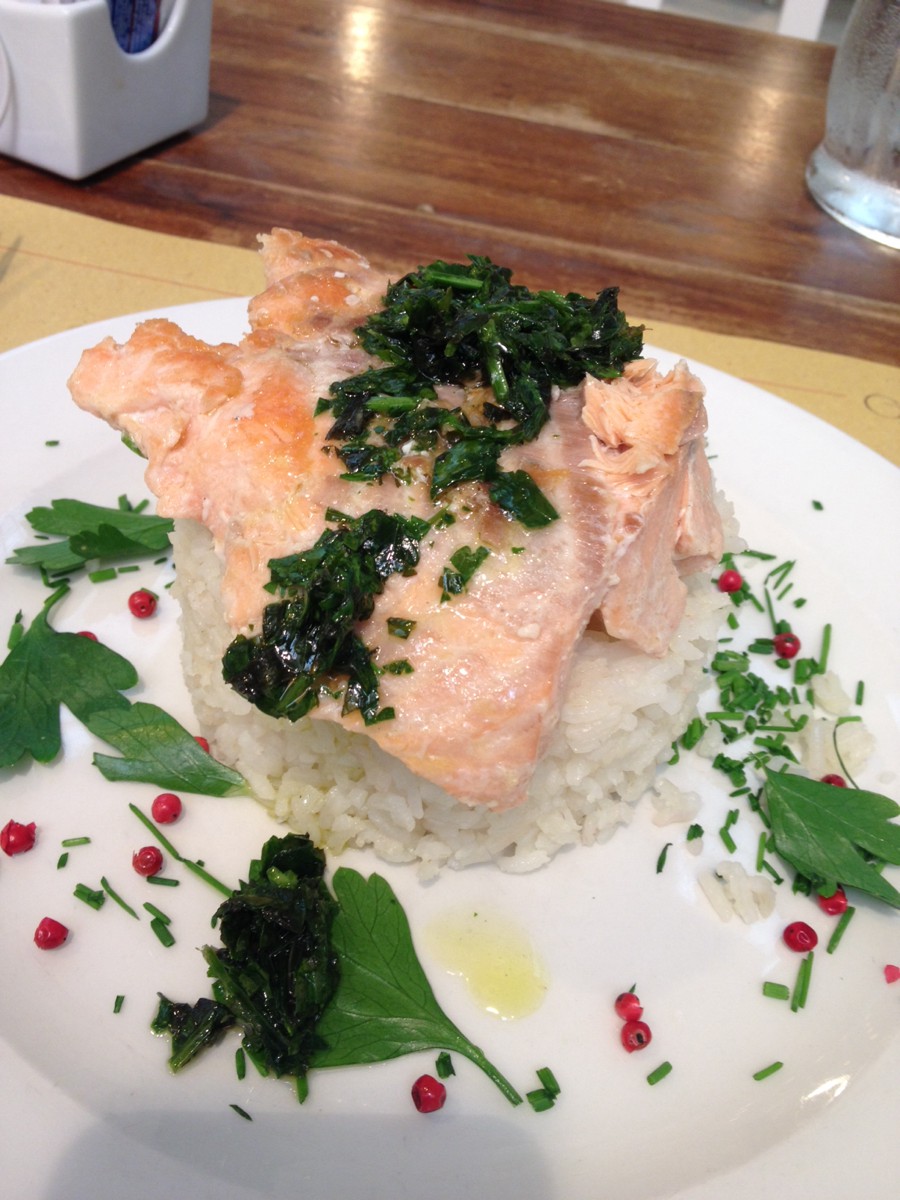 I went to this place called Ginger on via Borgona something (I definitely spelled that wrong), two minutes from the Spanish Steps, which I read about on Spotted By Locals. I was starving when I got there; I woke up at 11 and missed breakfast and I felt like I could eat a horse. Admittedly, after my caprese I was considering cancelling the second dish but I was too lazy to try to get the waiter's attention. I wound up finishing everything save for two and a half pieces of bread and some rice.

The salad was amazing. The tomatoes were so juicy and the cheese was creamy and chewy and just perfect. It was really filling but the salmon rice thing was so good that I had to eat it. The rice had just the right amount of salt and the fish was cooked just right. Everything was so balanced and natural-tasting and yet managed to be tasty enough to satisfy me (I like food that is strongly flavoured like curry and stuff; hence, I will always prefer Asian food to western food, generally speaking). It was an organic restaurant so it was a bit expensive...and I paid 36 euros for my lunch. I had two cappuccinos as well so it wasn't just those two dishes, though they were 14 and 15 respectively. Totally well worth the money! It was fabulous. The cappuccino was just ok; first cup better than the second. But I felt like
I was hungover; I was SO tired. I was also broody and sad and I needed something to cheer me up and coffee is my go-to pick-me-up, always and forever.

I would've enjoyed my food a lot more if I wasn't broody and sad though. Alas.

Anyway, I managed to have a great day despite my waking up feeling physically spent, then my being broody and sad for stupid reasons. I saw the Spanish Steps, the Trevi fountain thing, the Pantheon, the Piazza Navona, finally saw the Tiber, and...the Corte di Cassazione. 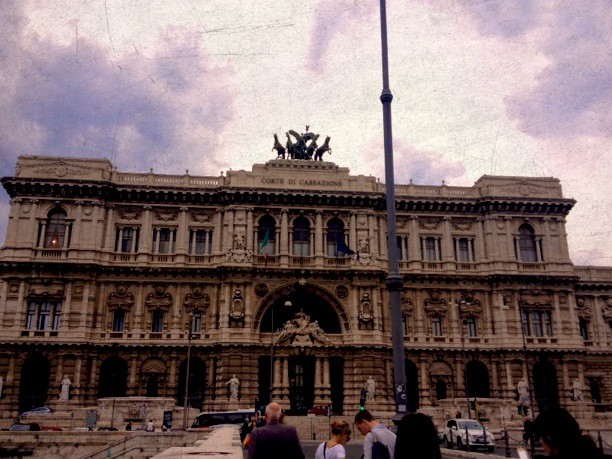 I must admit that I was pretty awestruck. It's a gorgeous building and I have a thing for Supreme Courts. I still stop and stare sometimes when I walk past the Royal Courts of Justice, never mind that I've walked past it 284763727183838 times already (I know the House of Lords aren't there but still. I know it's now the Supreme Court but I'm stuck in the past so sue me). Once again, I accidentally stumbled upon the Corte; I really just wanted to see the river and so I took the quickest route from the Piazza. Sometimes, not researching much beforehand and just figuring it out as you go along leads to nice moments like today, when I crossed the road to Ponte Umberto I and found myself staring at this majestic building. I was genuinely excited and awestruck and I started recalling the cases I read in CCL: Rights and Theory of Human Rights Law and trying to remember if any of them were Italian. Alas, the only Italian ones were those brought before the European Court of Human Rights. I heard that the building in Strasbourg is ugly. Also, I didn't know that Strasbourg was in France until the road trip; always thought it was in Germany. Obviously would never have heard of it if it weren't for the ECtHR.

A random note: in my head I pronounce "Cassazione" in its French equivalent. I immediately think of Gary Bell and his Comparative Legal Traditions course in Year 2 of law school, one of my favourite subjects, and I hear him say the French word in my head. Strange but true.

I was sent into a brief moment of panic when I felt fat rain drops on my head when I was salivating over the Corte. It rained pretty heavily...for all of one minute. I was relieved that it stopped pretty fast. Not only was I without an umbrella, I could see nowhere in my immediate vicinity where I could seek shelter either. I was glad, too, that the weather forecasts were wrong and that it didn't rain in the day. (I checked three forecasts, four including the app in my phone).

I was, however, rather horrified at the sheer number of tourists at the Spanish Steps, the Fountain and of course, the Pantheon. I mean, every time I have to go to Piccadilly Circus, which has become one of my most hated places in London, I am just blown away by how many people there are. Today, it was like being in Piccadilly Circus, but worse, because there weren't as much space and the crowd simply appeared way more massive. This was especially so at the Fountain. It was sheer madness.

I am also pleased to say that I got kicked out of the church at the top of the Spanish Steps because I was in a skater skirt that showed my knees. The guard was right on time because I was gonna leave anyway.

I feel like I have so much more to say but it's such a bitch writing on my phone and I can't wake up at 11 again tomorrow so I am going to bed.

I shall conclude this entry with a very profound thought: monogamy is a forced habit. At the very least, it's an acquired one.

Back to London tomorrow. I think I'm gonna miss Rome a lot. Can't wait to go to Trastevere and eat!!!