Being back in Amsterdam after two years, back in the city where I lived for a few months with a guy whom I thought was it, is surreal in a thrillingly nostalgic manner. The sky still bright at 9pm, I saw the orange-red setting sun in the distance, suspended above the Amstel, dyeing the sky a dusty pink. The familiar sight of the canals and the old Dutch houses, in various shades of brown, this lovely folksy, old school, 溫馨 charm... 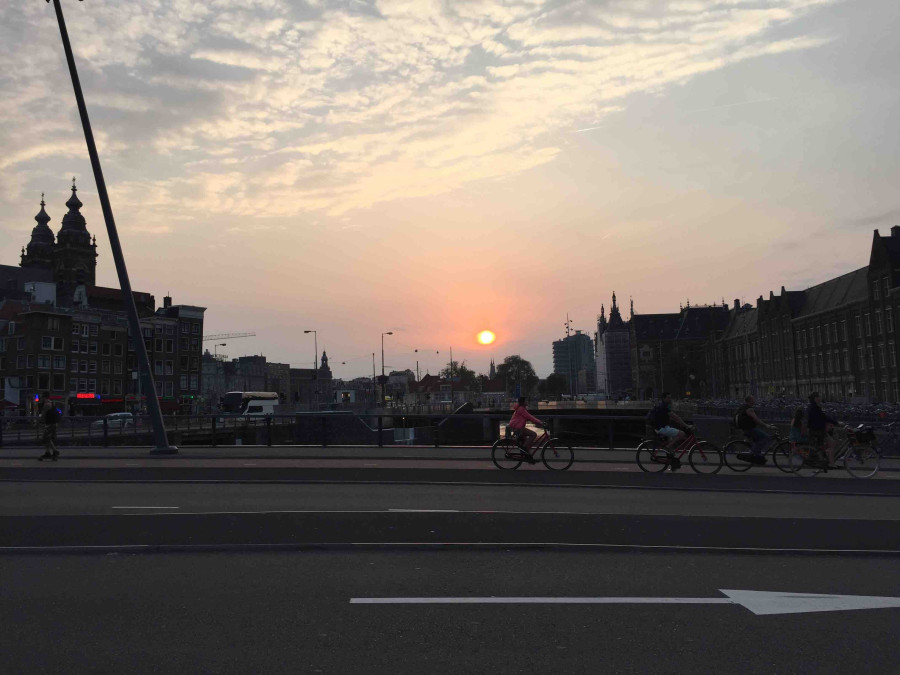 Being back here is like coming back to an unfamiliar home. It could very well have been home. I could not help but wonder why I left, why I didn't stay, why I didn't want to stay. It is such a picturesque city. Why wasn't it enough? What am I really after?

On a lighter note: drank some beer tonight at Bierfabriek which Wouter recommended when I asked for places with chicken for my dad. My salad was good. The beer was good for what it was. My dad was ecstatic to finally eat some dead carcass, after I subjected him to multiple meals at Tibits (great vegetarian restaurant) in every single Swiss city we went to. I even subjected him to a (great) vegan place that Raffie recommended in Zurich.

Our original 10am easyJet flight was cancelled, so we took a SwissAir 5.40pm flight, which was delayed for what felt like forever. We got here way too late which was annoying. It was also inordinately hot in Zurich. I could have handled it, but the Swiss have no concept of air-conditioning. It was so warm and stuffy in the airport (where we waited for four bloody hours) that I was tired, cranky, feeling sick. I am so thankful for the air-conditioning in my Amsterdam hotel room.

Lastly, Swiss chocolates are amazing. We bought truffles from Springli (?) - amazing. I bought vegan ones for John. The one piece that I bought for myself had melted when we opened our box of truffles on the plane thanks to the bloody heat and the non-existent air-conditioning. I really hope that his box hasn't become a huge melted mess.

I want to write more but it's such a pain to type on my phone. It's also hard to write when I'm in the same room as my parents and my dad is snoring away. So that's it for now.